The Human Side: Week 7 : Support Positive Psychology and Well Being 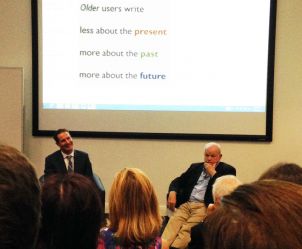 Resource Architecture was lucky to be invited to attend a private Q&A session at Geelong Grammar School with international thought leader in positive psychology and wellbeing Martin Seligman from the University of Pennsylvania.   Martin was a keynote speaker at the recent Australian Positive Psychology and Well-being conference in Melbourne. He also gave a public lecture at the Melbourne Town hall which was a sell-out.

Martin is also an advisor to governments, agencies and corporations worldwide. Notably, he is part of a task force commissioned by Prime Minister David Cameron in the UK to improve the wellbeing of the population of the British Isles, similarly the US Secretary of Defence engaged Martin to advise on how to help service men and women overcome trauma and improve wellbeing.

Within Education, Healthcare, Armed Services, Aged Care, as well as within industry, the emotional and physical wellbeing of people plays a critical role in life and work.

Martin argues that people flourish given the right behaviours, habits, attitude and environment which he calls €˜PERMA'  which means:

Martin noted that a library building in Manchester is all about engagement. So we asked Martin how important is the physical space in supporting the "PERMA" attributes.

GK Question: "You mentioned that a library is about engagement. Can the physical environment in which we work and interact in influence PERMA in any direct way?"

MS Response: "It's a wonderful question. As a psychologist, I've mostly done the inner environment but it is clear there is a reality out there and so the question is to what extent does our physical health, how much people like us, the physical space we are in, the architecture, the literature we read, the music we listen to, what does it do to us? These are great questions. I think the answer is a lot. But, what distinguishes psychologists of my brand, from do-gooders across the world, is that my concern has not been about changing the real world, but changing the internal world, so it is up to people like you who think about architecture, and music.'

He continues, "You know I've been spending time in South Australia because they are interested in Adelaide being the happiest city in the world. That is not going to be about what goes on in people's heads. That is going to be about the design of the city. So the people that know how to do that, (are) doing it, but we have some acute ways of measuring.'

How we measure wellbeing is key. Martin downplays the use of surveys and questionnaires and refers to the words people use in twitter and Facebook using 'Big Data' analytics. The more positive words in the "word cloud", the greater the level of wellbeing.  He also acknowledges that words used differ according to age and demographic.