Hot Desking vs Team Based Working 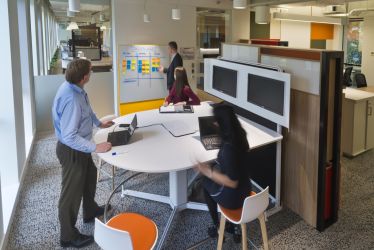 How team-based working overcomes the problems of traditional hot desking

1. The Problem with Hot Desking

Hot Desking has its roots in the mid 20th Century, initially as a means to reduce cost, but most often to increase organisational learning and agility. Today there are a range of hot-desking strategies, one is often referred to as Activity Based Working.  Activity Based Working is a term to describe a workplace where people are not assigned a desk, but are free to move to a setting suited to the task.   This overcomes the problem of open plan workplaces where one desk does not provide an environment able to support both collaboration and concentrated work.   This mobility is enabled largely by new wireless technology that allows people to work in any location at any time.

The problems and benefits of hot desking are well documented.  Although Activity Based working and other shared desk strategies have empowered the individual to choose how and where to work it has brought with it a suite of new problems. Problems have been identified by researchers of organisations all over the world[1]:

Proponents of Activity Based Working argue that many of the problems arise due to people maintaining their old work behaviours and habits rather than embracing the opportunities to change how and where they work. Others acknowledge that hot desking along with supporting technology supports people who are mobile, require flexibility or are very extraverted in work style but argue that it is a hindrance among those who spend most of their time at a desk or may be more introvert in work style.

There is anecdotal evidence that many organisations lose high calibre people following a transition to hot desking and Activity Based Working. The evidence comes not from organisations implementing the hot desking strategies, but rather from their competitors who continue to assign desks and who recruit the disaffected employees.

Within the Australian government, trade unions have stepped in to collectively represent employees at Fair Work Commission (Australia's national workplace relations tribunal), to ban hot desking, going as far as to claim that not assigning desks can be a form of workplace discrimination as people who arrive late, or who may be less assertive may be disadvantaged in their choice of desk[2].

In addition to the industrial relations issues and loss or dis-engagement of high quality employees, the problem of hot desking has also brought about an increase in remote working and teleworking by employees.   Partly in response to the problems of open plan and Activity Based Working and partly as a result of the increased flexibility through technology, many employees choose to adopt cloud working from other remote locations.  While Cloud Based Working (Teleworking) enables employees to work from home or elsewhere and increase individual productivity there is much debate about whether it is better for people to work remote from their team or better to have people work together with and interact face to face among their team.  This debate was a focus of Yahoo's 2013 decision to ban telecommuting, in favour of having people work within their workspace among their team[3].  Following much criticism, Yahoo argued that although people might be more productive working from home, they are more collaborative and innovative when they are together.    As a direct result of the ban, Yahoo has reported increase in employee engagement and productivity.  HP's CEO Meg Whitman quickly followed suit[4] and in March 2017 IBM, the pioneer of hot desking and working from home also announced that they too were abandoning teleworking[5]

Jeff Smith, IBM's CIO said his goal for IBM, is to make it 'agile'.  Although 'agile' can mean different things, it broadly refers to small self-organising teams that share a common purpose, share information and resources and continuously iterate on projects.  A feature of Smith's particular 'Agile Playbook' for IBM was that 'the leaders have to be with the teams and the teams have to be in a location together'. Smith, asks:

'Is it possible for a company the size of IBM to have the innovation and the pace of the small tech companies, of the best small teams, but have the scale of IBM?

At the IBM office in New York, employees work side by side among their team at table-style desks pushed together in clusters within open plan spaces.  The only references to the team are white boards and markers.  They still need to rely on noise cancelling sound systems to keep conversations from distracting other teams[6].  In other words, the workplace is little different from the traditional models and the problem may build again.

3. How Team Based Working Overcomes the Problems

Organisations are embracing teams but the traditional workplace has not solved the problems of hot desking and is not designed to get the best out of the team. Traditional workplace models, whether open plan, hot desking or Activity Based Working are largely designed for the older command and control management structures that focus on delivering efficiencies and managing the individual rather than delivering outcomes and empowering the team.

It is proposed here that the root of the problem (and solution) has been overlooked.   That is, how organisations and the workplace support and connect teams and how teams then support and connect the individual. The question in respect to the work place is; is it possible for small teams to overcome the problems of hot desking, working together as a team face to face?  Psychologists and behavioural scientists have written much about how people work together as teams, but there is very little written about how workplace and work space support work teams. 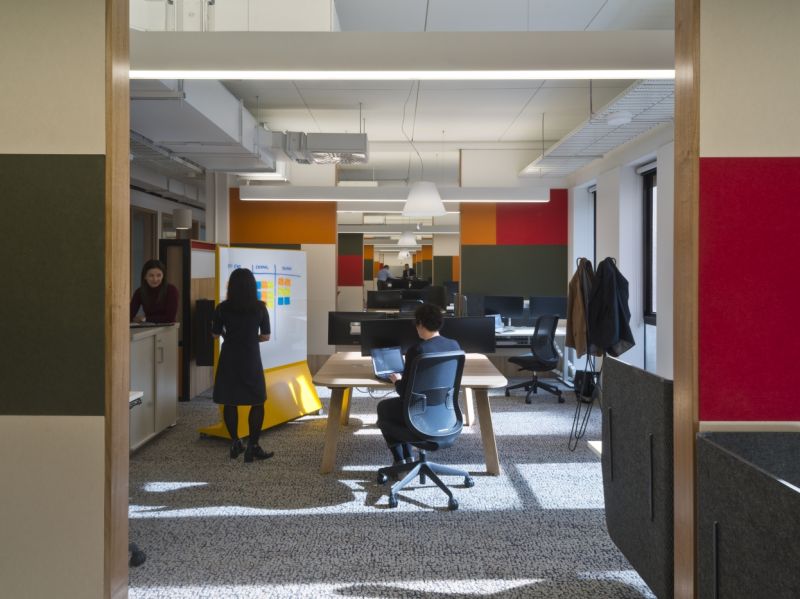 In what may be a world first, Resource Architecture, together with La Trobe University Research Group have developed a pilot Exemplar Workplace which seeks to address some of the problems of open plan, hot desking and Activity Based Working, building upon the concept of supporting and connecting teams while delivering the benefits of Activity Based Working.

Team Based Working is based on breaking down the organisation into small self-organising teams of between 4-8 people, accommodated within their own half enclosed 'team domain'.   The team domain introduces full height partitions that provides a home for and defines the team, but retains visual and physical connection to other teams, and common shared support spaces.  Teams are allocated a '˜domain' which they call their own, but desks are not allocated in order to encourage collaborators to share and work within the team domain.    A variety of desk types are provided within the domain, most within corner, maximising visual and acoustic privacy.  The domain is bounded by personal lockers and work in progress storage.  Other team based work tools and technologies are provided to enable mobility, face to face collaboration and team based agile methodologies.

For more information about Team Base Working, to download a whitepaper or book a live tour click on the this link: www.teambasedworkplace.com.au